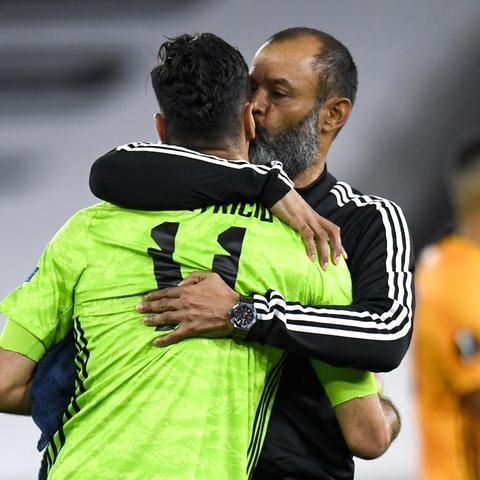 Wolves manager Nuno Espirito Santo has asked his players to remain focused after they secured a Europa League quarter-final clash with Sevilla.

Raul Jimenez’s penalty secured their spot in the last eight as Wolves beat Olympiakos 1-0 in their last-16 second-leg tie on Thursday, progressing 2-1 on aggregate.

It’s the first time Wolves have reached a quarter-final in Europe since 1972.

Wolves’ squad and staff gathered on the pitch after the match having extended a season that started more than a year ago, and Santo wants one final push.

“I told the boys, ‘OK our holidays must wait. We will have them, but not now’,” he was quoted as saying by thePress Association.

“It was the last game at Molineux this season, we miss our fans, it’s not the same but the boys must be proud. Let’s hope we are together again at Molineux.

“We started with Crusaders a long time ago, more than a year ago. Everyone has to realise that it’s been a long, long season. We’ve had a fantastic victory which allows us to be in the last eight, it’s huge.

“I don’t know how many miles we’ve travelled, it’s crazy. That’s what I said to the players.

“Now we will rest and we’ll focus on Sevilla. We are going to face a very good opponent. It’s going to be tough but let’s make this final effort. It’s challenging ourselves.”

These were the details of the news Wolves enter first European quarter-final in almost 50 years – in pictures for this day. We hope that we have succeeded by giving you the full details and information. To follow all our news, you can subscribe to the alerts system or to one of our different systems to provide you with all that is new.

It is also worth noting that the original news has been published and is available atThe Nationaland the editorial team atAlKhaleej Todayhas confirmed it and it has been modified, and it may have been completely transferred or quoted from it and you can read and follow this news from its main source.

Wolves could take summer spend to over £100m mark as Wanderers move ahead of Manchester United in chase for – talkSPORT.com