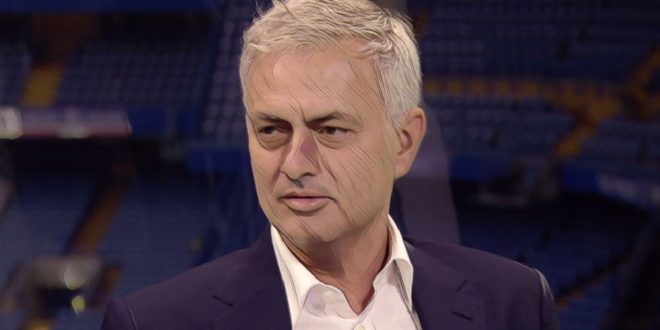 Manchester Unitedset up with a back three of Victor Lindelof, Harry Maguire and Marcos Rojo – the latter a late replacement for Axel Tuanzebe – with Aaron Wan-Bissake and Ashley Young operating as wing-backs.

Despite coming into the game with 17 consecutivePremier Leaguewins under their belt and starting the season in flawless fashion,Liverpoolstruggled to break down the Red Devils compact defence, with Ole Gunnar Solskjaer’s side happy to defend and strike on the counter.

Speaking after the game, Jurgen Klopp seemed towhinge about United’s tactical approach, though Jose Mourinho said that German’s side lacked the ability to break down United’s ‘low block’, as well as aiming a dig at Klopp’s record at Old Trafford which now stands at four draws and a defeat.

“He [Klopp] didn’t like the menu,” Mourinho toldSky Sports.

“He likes meat and he got fish.

“United, with the limitations they have at the moment, they played with five at the back, were solid and didn’t give the chance of transition. Jurgen Klopp didn’t like the menu.

“They [Liverpool] missed quality to play against a team with a low block.

“They have a fantastic record of so many victories. But they have limitations against teams with low blocks. They can smash opponents that play the way they want to play against.

“Jurgen clearly has frustrations. It’s a fantastic situation for his team. But at Old Trafford – which is a special place to win – he [Klopp] never did it.”

Exclusive: Kane on Mourinho, his numbers and why European football is a must – BT TV