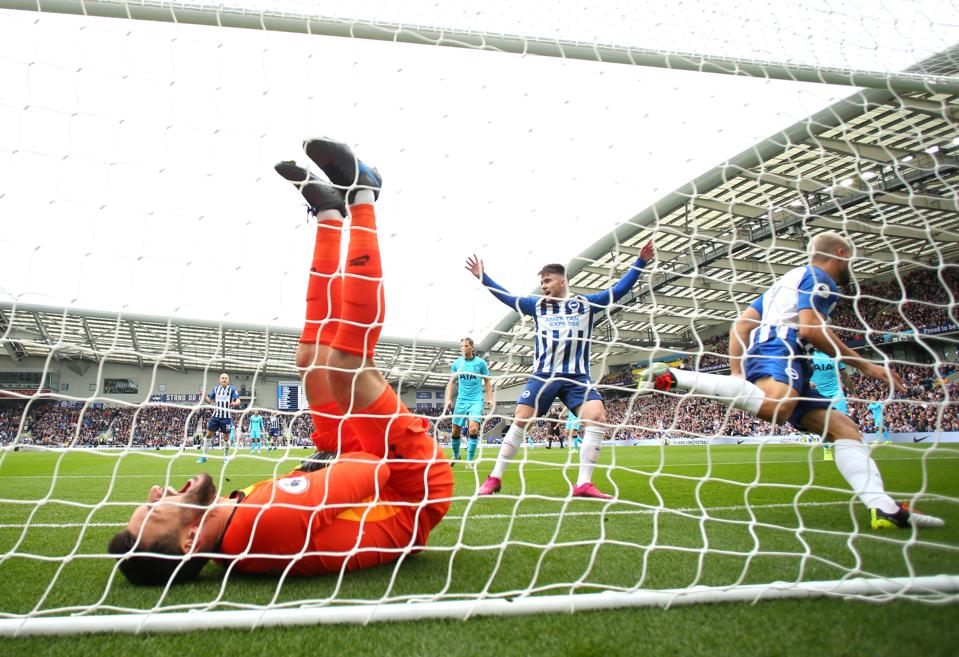 BRIGHTON, ENGLAND – OCTOBER 05: Neal Maupay of Brighton and Hove Albion celebrates after scoring his sides first goal past Hugo Lloris of Tottenham Hotspur, who goes down injured during the Premier League match between Brighton & Hove Albion and

Hugo Lloris’ horrific injury against Brighton is yet another setback for a Spurs team seeking to recreate the almost-magic of last season.

The French World Cup winner dislocated his elbow as he allowed a soft early goal – the injury came a fraction of a second after the mistake – at the Amec Stadium. It was the end of a bad week for the 32-year-old, having had to pick the ball out of the back of his net seven times at home against Bayern Munich in the Champions League.

That nightmare had come soon after Lloris’ howler against Southampton, when attempting a Cruyff turn in his own six-yard area. These aren’t a new phenomena for Lloris, who has a history of howlers.

Boss Mauricio Pochettino has shown great faith with Lloris, as well as many of his underperforming stars, this season, and indeed over several seasons. Spurs have had a much more stable squad than most of their English rivals. Seven of Spurs’ team against Brighton were in the team five years ago in the 2014-15 season. In comparison, just three of Manchester City’s and two of Liverpool’s lineups have lasted that long.

Of course, with the transfer window closed, Pochettino isn’t able to buy a top class replacement for Lloris now. But, why hasn’t he before? Will he in the winter window? Probably not, for that squad stability is also a sign of a club that is not in a buying phase of its existence.

This is probably not unrelated to the $1 billion investment in a new state-of-the-art stadium. The plan, of course, is to make even more money from TV, tickets, hospitality, merchandising, but in the shorter term there is debt to finance.

The plan is not just based upon the riches of the Premier League, but the expected continued participation of Spurs in the Champions League, a tournament which the club came heartbreakingly close to winning last season.

But participation in Europe’s premier club competition is not guaranteed where the Big Six are competing for four spots. Even with some of the big clubs – most notably Manchester United and Chelsea – in rebuilding phases (to put it kindly), there are plenty of other teams desperate to break into the biggest league.

Spurs cannot afford to slip from the standards attained in recent seasons, powered by Harry Kane’s goals and an attractive mix of multi-national midfielders. But the current team has a faint whiff of staleness about it. Will Pochettino – or his successor should it come to that – be allowed the funds to invest on the field?

Speaking about the stadium finances, Goldman Sachs’ Greg Carey, who helped put the money together, said: “There’s three risks you have: construction risk, completion risk and revenue risk. What we help the clubs do is eliminate those first two…and then we invest, we give them money or we get investors for that revenue risk. And if you take a look at the revenue projections of new stadiums or renovated stadiums, you don’t miss by much.”

Carey’s team have done such work with many American sports franchises, but those teams compete in closed monopolies. For Tottenham there is always the fear that they won’t always be at the top table. Do they need to start spending money on players to justify