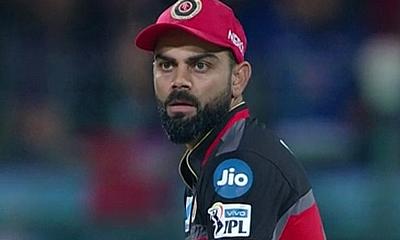 The second match on double-header Saturday would be played between Kings XI Punjab and Royal Challengers Bangalore at the Punjab Cricket Association IS Bindra Stadium in Mohali.

Royal Challengers Bangalore are in a dire state and have not won even a single match out of their last six. They have already put themselves in a situation where it is almost impossible for them to qualify but if they lose this one as well, it would put an end to any hope that they might harbour.

Virat Kohli and Parthiv Patel will open the batting for the team as both are among top five scorers for RCB this season. Dale Steyn will only be available to RCB from April 16, which means he will not feature in RCB’s next two matches. Yuzvendra Chahal would lead their bowling attack for the time being.

Kings XI Punjab batters tried their best in the last match against Mumbai Indians but their bowling let them down. Lokesh Rahul smashed an unbeaten 64-ball hundred while Chris Gayle made 63 in an innings decorated with three fours and seven sixes.

The middle order could not contribute. Despite that, it were the efforts from KL Rahul which pummelled the team to 197-4.

While trying to defend the total, no Punjab bowler other than Mohammed Shami looked threatening. Shami was their pick of the bowlers and ended with figures of 4-21-3.

However, Ankit Rajput and Sam Curran gave runs in excess of 50 as the team could not defend even 197 and lost the match on the last ball.

Let’s have a look at the probable playing XI of both teams.

Who will win? – Kings XI Punjab

*NB these predictions may be changed nearer the start of the match once the final starting teams have been announced and we will be running ‘In–Play’ features soon, so stay tuned.