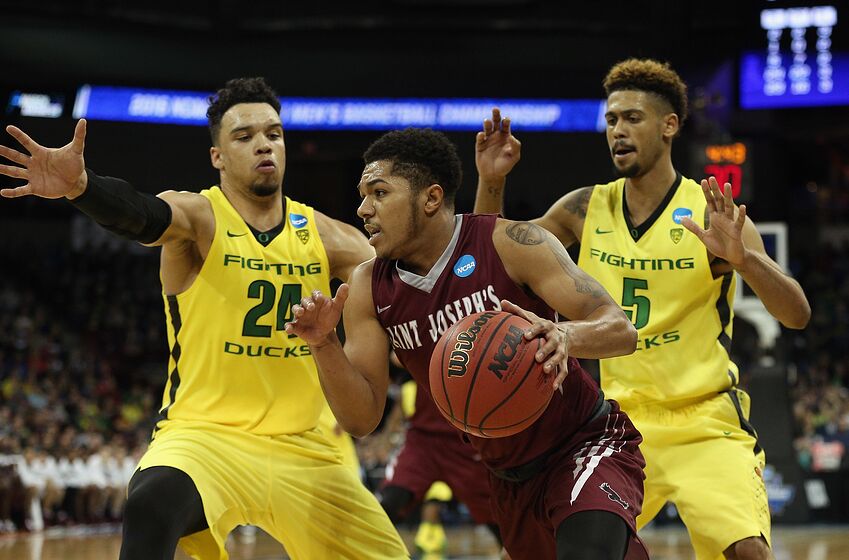 SPOKANE, WA – MARCH 20: Lamarr Kimble #0 of the Saint Joseph’s Hawks drives against Dillon Brooks #24 and Tyler Dorsey #5 of the Oregon Ducks in the second half during the second round of the 2016 NCAA Men’s Basketball Tournament at Spokane Veterans Memorial Arena on March 20, 2016 in Spokane, Washington. (Photo by Patrick Smith/Getty Images)

A day after it appeared Louisville basketball could possibly have a scholarship opening up, the Cards land a commitment from a highly sought after graduate transfer.

On Wednesday, VJ King announced his intentions to test the NBA draft waters, while keeping “all options open.” Today, the Cards landed a commitment from graduate transferLamarr Kimble.

Nicknamed “Fresh,” Kimble was named a captain every year, and started for three years for St. Joseph’s. He averaged 15.6 points, 3.6 rebounds, and 2.8 assists in 23 games during his redshirt Junior campaign.

Kimble is a drive first guard, who scores the majority of his points at the rim or in mid-range. Though he shot the 3 ball frequently out of necessity at St. Joes, he is only a career 32% shooter from beyond the arc.

For a Louisville team that needed another scoring option, Kimble will fit in very well for the Cards. He has the ability to create his own shot off the dribble, and he is the kind of guy, similarly to Christen Cunningham, who is going to get you a lay up or get to the free throw line when needed.

The Cards will benefit from Fresh’s underdog, chip on his shoulder mentality. He didn’t receive many looks out of high school as an undersized guard, but that didn’t stop his competitive drive once he arrived in college. Kimble is the type of guy to come in and make an instant impact off the court, regardless of how much playing time he sees for the 2019-20 Cards.

Though he is a score-first guy, Kimble could be another option at the point for Louisville as well. As his career moved forward, he increased his assist numbers every season.

If you are looking for a former Card to compare Kimble to, he is very similar to Chris Jones, who was a point guard during his time in Louisville, but showcased the propensity to put the ball on the floor and get buckets.

Fresh Kimble is a dog who is going to give the Cards an edge on and off the court. A great pick up for Chris Mack, who is going to have to contend with a completely new roster in 2019-2020.

Utah basketball won’t get into the NCAA Tournament, but they might get an NIT invite – Salt Lake Tribune